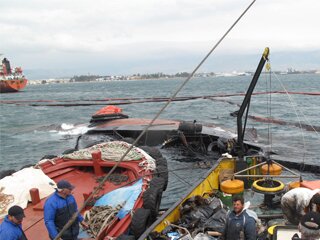 On 5th March 2012, the Greek tanker ALFA I (1,648 GT; built 1972) made contact with a submerged wreck in Elefsis Bay, Greece. This resulted in a 30m lateral shear to the hull and ALFA I sunk shortly after, resulting in the tragic loss of the Captain.

The first reports of oiling were made by the Port Authorities on the 6th March 2012.

Booms were placed around the wreck of the vessel while salvage operations took place. By the end of April 2012, all the pumpable oils located in the wreck were successfully recovered, counting for 90% of the estimated amount of oil on board at the time of the incident.

Manual clean-up of the contaminated shoreline in Elefsis Bay was carried out from March to the following June by a local contractor, primarily to remove contaminated beach material.

ITOPF arrived on site shortly after the incident at the request of the vessel’s insurer, to work with the owner-appointed surveyors and the oil spill response contractor to survey the incident area and understand the extent of the pollution. ITOPF worked subsequently with the IOPC Funds on the assessment of claims for the clean-up activities.

ALFA 1 is the first incident under the Supplementary Fund Protocol.