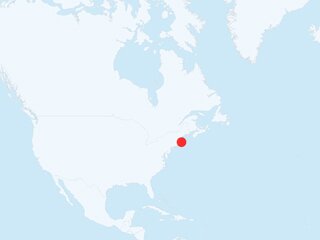 ARGO MERCHANT ran aground on Nantucket Shoals, off Massachusetts, USA, on 15th December 1976, and over the next month spilled her entire cargo (28,000 tonnes) of Venezuelan No 6 fuel oil and cutter stock. Storms broke up the tanker after grounding, and attempts to pump the oil into another vessel failed. In-situ burning was attempted on two occasions, but the slick failed to remain alight.

Winds during the spill period were offshore from Massachusetts, and as a result no oil from ARGO MERCHANT ever reached the shoreline and no coastal impact was reported. Hydrocarbon contamination of the bottom sediments was restricted to an area immediately around the wreck, and apparently was short-lived. The bulk of the spill formed large 'pancakes' and sheens on the surface; these were carried offshore over the continental shelf and into the prevailing North Atlantic circulation pattern. The cutter stock, which was mixed with the fuel oil to improve handling, entered the water column. Despite its relatively high potential toxicity, there was little evidence of impact on the marine fauna or phytoplankton. The accident occurred at the time when the fewest potential effects on pelagic organisms would be expected; a period of low productivity in the water column, with few fish eggs and larvae present. Oiled birds were seen near the wreck, and though total mortalities are difficult to evaluate, it was concluded that the spill probably had little effect on the coastal and marine bird populations off the New England coast. The outcome of the ARGO MERCHANT oil spill appears to have been fortunate in several respects: - the winds were almost continuously offshore, preventing the oil from coming on the beaches; the density of the oil was low enough so that it did not sink and contaminate the bottom, and the spill occurred in the winter when the biological activity, productivity, and fishing activities are relatively low.