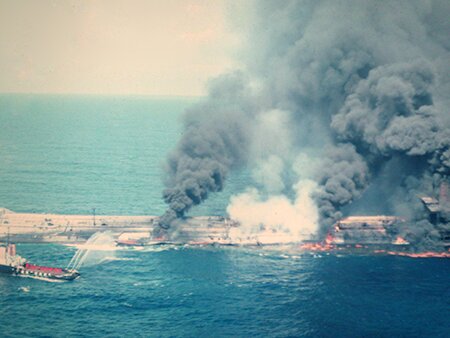 On 19 July 1979 two fully loaded VLCCs (very large crude carriers), the ATLANTIC EMPRESS and AEGEAN CAPTAIN, were involved in a collision approximately 10 miles off Tobago during a tropical rainstorm. Both vessels began leaking oil immediately after the collision and both caught fire.  Several crewmen lost their lives.

The fire on board the AEGEAN CAPTAIN was brought under control and the vessel was eventually towed to Curacao where its remaining cargo was discharged. The still blazing ATLANTIC EMPRESS was towed further out to sea on 21 and 22 July.  A week later, when 300 nautical miles offshore, a large explosion caused severe damage to the vessel; it began to list and eventually sank on 2 August.

The response to the incident involved a significant fire-fighting effort and use of dispersants to treat the oil that was spilled during the original incident and while the vessel was being towed.

An estimated 287,000 tonnes of oil was spilled from the ATLANTIC EMPRESS, which makes this the largest ship-source spill ever recorded.  No impact studies were carried out, so it is not known what quantity of oil was burned or sank.  Only very minor shore pollution was reported on nearby islands.