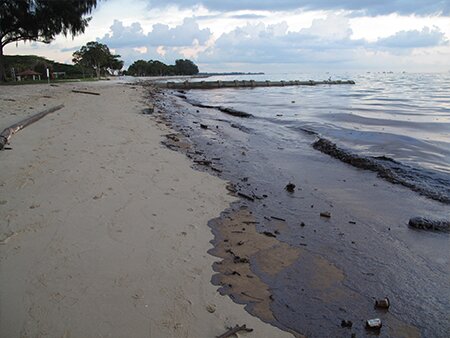 The collision resulted in a release of approximately 2,500 tonnes of Bintulu Crude oil. Over the next few days the oil stranded along several kilometres of the southern and eastern shorelines of Singapore and the islands within the East Johor Channel. Several important shoreline resources including amenity beaches, marinas, a Naval Base and a marine reserve were contaminated. Two days after the collision, oil also started to come ashore in Malaysia and eventually impacted approximately 35km of shoreline of the Johor Bahru and Kota Tinggi.

Following notification of the incident, the Singapore Maritime & Ports Authority (MPA) mobilised response vessels and personnel to monitor the oil spill situation and to undertake response activities. At the height of the response more than twenty vessels, supplied by several companies were involved in spraying dispersants and oil containment and recovery. Boom arrangements were also established to protect important shoreline resources. Shoreline clean-up was mobilised very rapidly and involved personnel from the National Environmental Authority and private clean-up contractors. The cleaning of most shoreline sites was accomplished relatively quickly with manual labour (up to 450 people per day) using rakes and shovels.

In Malaysian waters, the at-sea response was supervised by the Malaysia Marine Department and reportedly involved fifteen response vessels either applying dispersants or deploying boom and skimmer combinations to contain and collect oil. Along the shore, the clean-up activities were divided between four commercial contractors who in turn employed local villagers with a total workforce of up to 300 individuals on a daily basis. Clean-up techniques were similar to those employed in Singapore and involved the collection of oil, oil contaminated debris and heavily contaminated beach material from the sand beaches using rakes and spades. The majority of shorelines were cleaned within three weeks with the final work completed by early October.

The incident qualified under the Civil Liability and Fund Conventions, although costs did not exceed the shipowner's limit of liability.

ITOPF attended on site in Singapore immediately after notification of the incident at the request of the vessel's P&I Club and shortly after, dispatched a second staff member to assist in Malaysia. Staff worked closely with MPA, the owner and the P&I local correspondents within the incident command to promote a positive, proportionate response and assisted with surveys and establishing appropriate levels of work. Assistance was provided to the P&I Club for the assessment of claims from various parties.

Following the completion of response activities in Singapore, MPA contacted ITOPF to undertake a review of the government's response to the BUNGA KELANA 3 incident and to assist in a revision of the national oil spill contingency plan.