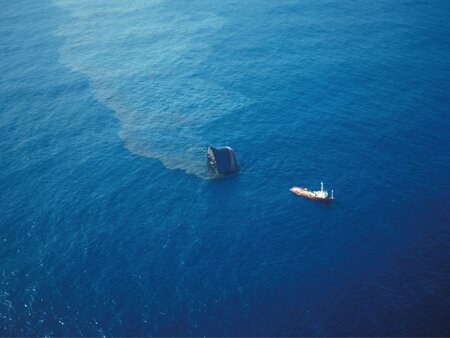 CASTILLO DE BELLVER, carrying 252,000 tonnes of light crude oil (Murban and Upper Zakum), caught fire about 70 miles north-west of Cape Town, South Africa on 6th August 1983. The blazing ship drifted off shore and broke in two. The stern section - possibly with as much as 100,000 tonnes of oil remaining in its tanks - capsized and sank in deep water, 24 miles off the coast. The bow section was towed away from the coast and was eventually sunk with the use of controlled explosive charges. Approximately 50-60,000 tonnes are estimated to have spilled into the sea or burned. Although the oil initially drifted towards the coast, a wind shift subsequently took it offshore, where it entered the north-west flowing Benguela Current.

Although a considerable amount of oil entered the sea as a result of the CASTILLO DE BELLVER incident, there was little requirement for cleanup (there was some dispersant spraying) and environmental effects were minimal. The only visible damage was the oiling of some 1,500 gannets, most of which were collected from an island near the coast where they were gathering for the onset of the breeding season. A number of seals were observed surfacing in the vicinity of the dispersant spraying activities but were not thought to have suffered any adverse effects.

Also of initial concern was the 'black rain' of airborne oil droplets that fell during the first 24 hours of the incident on wheat growing and sheep grazing lands due east of the accident, although no long-term damage was recorded from these residues. The impact on both the rich fishing grounds and the fish stocks of the area was also considered to be negligible.