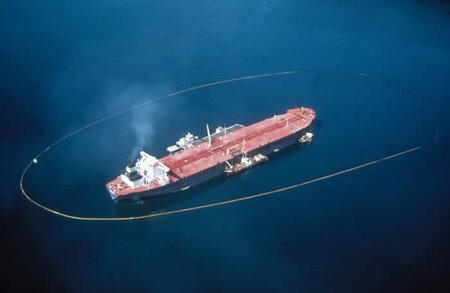 EXXON VALDEZ grounded on Bligh Reef in Prince William Sound, Alaska, on 24th March 1989. About 37,000 tonnes of Alaska North Slope crude escaped into the Sound and spread widely. There was some limited dispersant spraying and an experimental in-situ burn trial during the early stages of the spill, but at-sea response concentrated on containment and recovery. Despite the utilisation of a massive number of vessels, booms and skimmers, less than 10% of the original spill volume was recovered from the sea surface. The oil subsequently affected a variety of shores, mainly rock and cobble, to varying degrees over an estimated 1,800km in Prince William Sound and along Alaska's south coast as far west as Kodiak Island.

This spill attracted an enormous amount of media attention because it was the largest spill up to that date in US waters (although well down the scale in world terms). Moreover, it happened in a splendidly scenic wilderness area with important fisheries and attractive wildlife such as sea otters and bald eagles. Consequently the response was one of the most expensive to a spill of oil from a ship, with over 10,000 workers being employed at the height of the cleanup operations, many of them in shoreline cleanup, often in remote areas. The clean-up cost for the first year alone was over US$2 billion. Exxon Mobil has reportedly paid $4.3 billion as a consequence of the spill, including cleanup costs and various legal settlements, court verdicts and criminal fines.

Shoreline cleanup techniques included high pressure, hot water washing, which was carried out on a scale never attempted previously or subsequently. This caused substantial impact in intertidal communities and may have delayed their recovery in some areas, although recovery on over 70% of oiled shorelines was progressing well one year after the spill. There were also some relatively large scale bioremediation trials that gave mixed results. About 1,000 sea otters are known to have died, and over 35,000 dead birds were retrieved. There were particular efforts to protect fisheries, for example with booming of salmon hatcheries. Oil residues remain trapped in intertidal sediments at a few locations and scientists dispute the evidence of long-term damage to wildlife and fish populations. Indeed, assessment of damage and recovery has been controversial because of the segregation of scientists into different camps, as a result of US litigation practices.