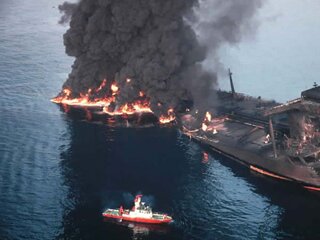 On 11th April 1991 the very large crude carrier HAVEN, with 144,000 tonnes of Iranian heavy crude oil onboard, suffered an explosion while anchored in Genoa Roads. The explosion was caused reportedly by an electrical spark during tank cleaning and resulted in the loss of six crew members. The vessel broke into three sections with one section sinking close to the anchor location. The vessel drifted south-west where the bow section then sank. The remaining main section was towed towards Capo Arenzano, west of Genoa. Fire-fighting operations were initiated rapidly after the initial explosions, but were unable to extinguish the fires on board. As a consequence, the main section of the vessel sank approximately 1 ½ nautical miles offshore on 14th April following further explosions.

The exact fate of the cargo is not known. However, estimates suggest approximately half of the oil onboard burnt during the explosions and fires. Over 10,000 tonnes of oil were estimated to have spilled prior to the sinking of the main section with further releases of oil for more than a year. The oil spilled initially spread widely along the north shores of the Ligurian Sea, resulting in heavy contamination of the Italian coastline, and to a lesser extent of the French and Monaco shores. The response at sea resulted in the collection of approximately 5,500m3 of oil. Considerable lengths of boom were deployed in an attempt to protect the shoreline, and although successful initially, storms pushed oil onto the beaches eventually. Shoreline clean-up was undertaken primarily by volunteers and military personnel and involved mostly manual removal of oil and oiled debris.

The IOPC Funds note payments of 95.5 billion Lira were made to Italian claimants including fishermen and tourist businesses, as well as 23 million Francs to French claimants, primarily for clean-up. These figures include payments made by the P&I Club concerned.

The wreck of the main section of HAVEN is now a noted diving location and artificial reef.