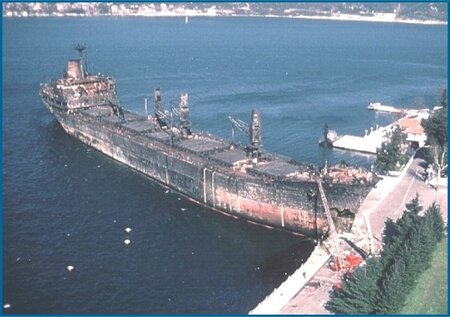 On 15th November 1979, Romanian tanker INDEPENDENTA collided with the Greek cargo ship EVRIALI, off Haydarpasa at the entrance to the Bosphorus, in Turkey. A part of the cargo of 93,800 tonnes of Libyan Es Sider crude oil spilled and caught fire. The vessel also had 260 tonnes of heavy fuel oil bunkers on-board.

42 crew members died in the ensuing explosion and fire on board the vessel and from burning oil on the water. Buildings were reportedly damaged up to 6km away.

Further explosions occurred on the vessel on 18th November and 6th December, resulting in further releases of oil to the sea. Attempts by the Turkish Navy to fight the fire were unsuccessful.

The casualty grounded close to the port with the fire eventually burning itself out on 14th December. The Bosphorus was closed to traffic for a number of weeks.

The majority of oil was reported to have been consumed in the fire, with only minor contamination of nearby shorelines. Some oil did enter the port of Haydarpasa despite a boom being present across the port entrance. The wreck was removed by local salvors following an allision by a local ferry in 1983.

ITOPF made a number of visits to the area in the 9 months following the initial accident in order to determine the extent of the contamination and to advise the Turkish authorities on response measures. ITOPF also supported the shipowner to provide pollution response equipment from the UK to Turkey and assisted the P&I Club to assess claims from various parties.