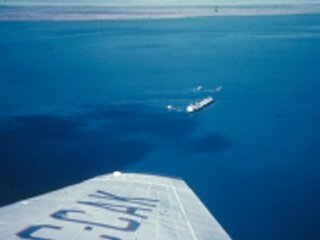 METULA grounded in the eastern Strait of Magellan, Chile, on 9th August 1974. About 47,000 tonnes of light Arabian crude oil and 3,000 to 4,000 tonnes of heavy fuel oil are estimated to be have been lost. Large volumes of water-in-oil emulsion were produced in the rough sea conditions and much of this landed on shores of northern Tierra del Fuego. Most of the shores affected were of mixed sand and gravel, but two small estuaries including saltmarshes were also oiled. About 4,000 birds are known to have been killed, including cormorants and penguins.

No cleanup was done due to the remoteness of the area, and consequently this remains a distinctive spill site - mainly because hard asphalt pavements formed on many shorelines. The long-term fate and effects of heavy oiling have been extensively investigated. One very sheltered marsh received thick deposits of emulsion and, 20 years after the spill, these deposits were still visible on the marsh surface, with the mousse quite fresh in appearance beneath a weathered surface skin. Little plant re-colonisation has occurred in the areas with thicker deposits of 4 or more cm, though it is proceeding in more lightly oiled areas. On sand and gravel shores, an asphalt pavement remained in a relatively sheltered area in 1998, but oil deposits had mainly broken up and disappeared from more exposed shores. These remain amongst the longest-term contaminants recorded for an oil spill, even though they have not resulted in significant impacts on fisheries or the biology of coastal waters.