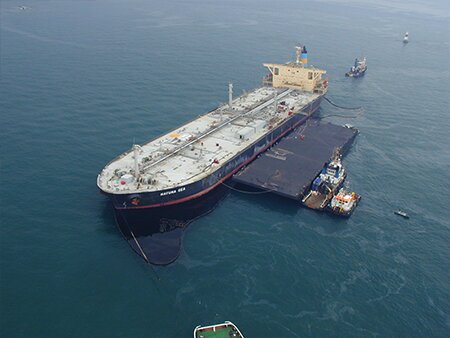 Tanker NATUNA SEA (51,095 GT; built 1980) grounded in Indonesian waters in the Singapore Strait on 3rd October 2000. At the time of the incident, the vessel was laden with 70,000 tonnes of Nile Blend crude oil. The grounding damaged a number of cargo tanks and estimates put the spill size at about 7,000 tonnes based on ullage measurements. Following the lightering of the remaining cargo, the vessel was re-floated successfully on 12th October 2000.

With almost no wind, the oil moved with the tides back and forth along the length of the Singapore Strait, eventually contaminating shorelines in Singapore, Indonesia and Malaysia. A response was mounted by the ship's managers, under the direction of the Singapore Maritime & Port Authority (MPA).

At-sea response initially consisted of the aerial application of dispersant, which is understood to have been judged successful by those on site at the time. Further application was requested by MPA, but due to the oil's high wax content and pour point (33-36°C), the ambient sea temperature (28°C) and the effects of more than 24 hours' weathering, it was considered highly unlikely that this would be effective. A comprehensive evaluation of subsequent dispersant spraying operations from boats was conducted by two independent scientists from the UK on 5th October 2000. It was concluded that, for all operational purposes, the spilled oil was no longer amenable to chemical dispersion.

The strategy for oil pollution counter-measures at sea thus turned to containment and recovery. A number of obstacles still had to be overcome: the semi-solid nature of the oil along with the associated heavy debris presented severe problems for skimming and pumping, whilst the lack of suitable vessels, particularly barges to receive the recovered oil, delayed these operations by several days. Approximately 1,000 MT of oily waste was recovered at sea, which was sent to Indonesia for disposal.

In addition to these operations, a large number of small low-freeboard shallow-draft wooden hulled vessels and small harbour tugs were engaged in combating oil floating closer to the Singaporean shorelines. Vessels from locally-based oil companies were also dispatched by MPA. These vessels employed manual methods to scoop oil from the water, with a variety of scoops, nets, and heavy oil sorbents (pom-poms/snares). Thousands of bags of waste were collected in this manner and taken to a disposal facility in Singapore.

Singapore - Most of the small islands south of Singapore Island were oiled to some extent, including the important tourist resorts of Sentosa, The Sisters and St John's Island, and Raffles Light. The western most contamination was at Sultan Shoal. A section of some 5 km at the eastern end of Singapore's East Coast beaches were lightly to moderately oiled, as were the dock walls of a new naval station at Changi.

Sentosa, the East Coast beaches and Singapore River were prioritised as the most sensitive areas for protection. At Sentosa, oil overcame the permanently moored booms, and some 2 km of additional boom was used in an attempt to protect the shoreline. Oil was removed manually from the shore into plastic bags, tens of thousands of which were collected and taken to disposal sites approved by the Singapore Ministry of Environment.

Indonesia - The northern shorelines of many of the Indonesian Riau Islands bordering the Singapore Strait were oiled, including Pulau Sambu, Pulau Batam and Pulau Belakangpadang. Shoreline clean-up used local manual labour drawn from the fishing communities in an effort to offset losses due to the disruption of fishing, the primary occupation among islanders. Work commenced on 11th October 2000 and a labour force of 300-400 hundred was used.

Malaysia - Oil contaminated the south-eastern coast of the Johor peninsula, reaching the shore on 11th and 12th October. The main contamination extended some 10 km from Tanjung Ayam to Tanjung Ramunia, including the small islets of Pulau Mungging. Lighter contamination occurred on the exposed east coast as far north as Tanjung Punggai.

The Malaysia Marine Department mobilised a small number of fishing vessels with sorbent boom and scoops to undertake small-scale operations at sea, while the Department of Environment organised shoreline clean-up using a combination of mechanical and manual techniques. Local volunteers provided the majority of the 400-strong work force, manually cleaning the sandy beaches. A contractor was appointed to clean more difficult areas including rocky shores, rock walls, confined spaces such as under stilt houses, fishing piers, and mangroves.

The incident qualified under the Civil Liability and Fund Conventions, although costs did not exceed the shipowner's limit of liability.

ITOPF was requested to attend on site by the P&I Club and the IOPC Fund and a technical adviser was mobilised to Singapore and to provide advice to the Malaysian authorities. A second technical adviser travelled subsequently to the Indonesian islands. ITOPF provided advice on at-sea response techniques (in particular the use of dispersants), shoreline clean-up and fisheries impacts, and also acted as liaison between the various national authorities and the ship's owners and insurers. Further staff were involved in the assessment of a variety claims for the P&I Club.