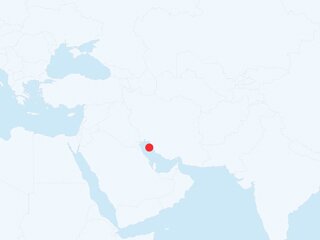 During the night of 6th December 1985 very large crude carrier (VLCC) NOVA, carrying 188,000 tonnes of Iranian Light crude oil, collided with ultra large crude carrier (ULCC) MAGNUM, in ballast, approximately 90 nautical miles south-east of Khark Island in the Gulf of Iran. Both vessels were engaged as shuttle tankers to transport oil between the Khark Island and Sirri Island terminals. The report issued by the flag state of NOVA concluded the incident occurred due to a lack of running lights on both vessels, a position adopted due to attacks occurring on tankers as a consequence of the ongoing Iran – Iraq war. The collision damaged five cargo tanks on NOVA, resulting in a spill of approximately 70,000 tonnes. Trajectory modelling of the spilled oil was undertaken with visual monitoring off Bahrain. Oil was observed briefly in this southern area before the wind turned and moved the oil back into the war zone. The oil was expected to evaporate and disperse at sea and no known action was taken, due primarily to the on-going conflict.