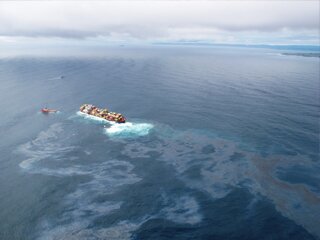 On 5th October 2011, fully cellular containership RENA (37,209GT, built 1990) ran aground on Astrolabe Reef, 12nm offshore from Tauranga in the Bay of Plenty, New Zealand. The vessel was en-route from Napier to Tauranga carrying 1,368 containers, 11 of which contained dangerous goods. The vessel had approximately 1,700 tonnes of IFO 380 bunker fuel and 61 tonnes diesel oil on-board.

The forward section of RENA remained grounded on the reef while the stern remained free, with the vessel listing to port. Heavy swells and strong winds caused the vessel to move higher onto the reef and sustain further damage as the list shifted to starboard with large cracks opening up along both sides of the hull.

Immediately following the grounding light sheen was observed around the casualty, followed by reported slicks of bunker fuel stretching from the casualty. Oil began to strand ashore on 10th October in the form of weathered tar balls. Further oil releases resulted in extensive, and in places heavy, oiling of the sandy mainland shoreline, inner Tauranga Harbour, estuaries and rocky offshore islands. Estimates of more than 200 tonnes of fuel oil were released from the vessel. Initially, 86 containers were lost overboard, including one containing dangerous goods (alkylsulphonic liquid, class 8). Oiled and non-oiled container debris washed ashore across a wide area of the Bay of Plenty to the East Cape.

Maritime New Zealand took overall command of the response, with support from trained local and regional councils, as well as international assistance from Australia, Canada, the US, Singapore and the UK. A trial spray of dispersant proved ineffective and no at-sea response was possible due to unfavourable weather and sea conditions. Shore-sealing and sorbent boom was deployed to protect sensitive harbour and estuary sites. Shoreline clean-up was conducted by New Zealand Defence Force personnel, local contractors and trained volunteers.

Cultural issues surrounding Maori guardianship of coastal land and resources resulted in the involvement of local Iwi in the shoreline clean-up at key cultural sites, with the support of professional responders and the provision of equipment and facilities. More than 1,000 dead oiled birds and 250 live oiled birds, predominantly Little Blue Penguins, were collected, the latter treated as part of a significant wildlife response. Pre-emptive captures of NZ fur seals and the endangered NZ dotterel were also carried out by trained responders from the NZ Department of Conservation and NGOs.

Subsequent bad weather widened the cracks and some months later, following another severe storm in January 2012, the casualty eventually broke into two parts with the loss of a further 200 – 300 containers and with the stern submerging partly onto the reef. A second salvor was appointed to remove parts of the wreck using helicopters, with assistance from divers to remove sections of the submerged hull and cargo and debris from the wreck site. Work continues in 2014, and has led to one of the most expensive wreck removal operations.

ITOPF attended on site immediately after notification of the incident at the request of the vessel’s P&I Club. Staff worked closely within the command centre and on the shoreline to advise on appropriate response techniques and record keeping. Three staff attended during the following month while the major shoreline clean-up was undertaken.