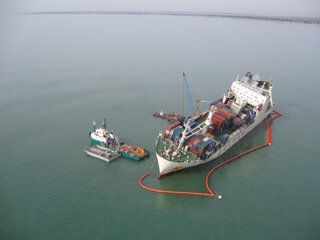 On 24th October 2006, the RO-RO vessel ROKIA DELMAS (33,000 GT; built 1985) suffered engine failure in rough weather and ran aground on the approach to La Rochelle, immediately south of île de Ré, France. The vessel developed a list and the engine room was flooded, but none of the 556 tonnes of Intermediate Fuel Oil (IFO 380) or 48.6 tonnes of diesel oil was lost.

The main sensitivity in the area was the extensive oyster farms, which were preparing for their peak business over the Christmas period. Salt production and mussel production are also carried out in the area to a lesser extent.

The French Contingency Plan, POLMAR Terre (shoreline), was activated following the incident, and the Centre of Documentation, Research and Experimentation on Accidental Water Pollution (Cedre) attended on site as official advisers to the government. The French Navy mobilised three vessels, one with oil spill response equipment (containment and recovery systems) on board, and further equipment from the regional stockpile was dispatched to the area. Offshore boom was deployed around the casualty during oil removal operations, and a deflection boom was set up around a large oyster farm. Pumping of the IFO 380 from the different tanks took seven days, followed by five days to skim the engine room and remove diesel and lube oils. Containers were then removed from the grounded vessel which was eventually cut in sections and removed in the following months.

ITOPF was asked to attend on site by the P&I Club and arrived on 25th October. Joint overflights were conducted with the authorities, and advice was provided on mariculture damage mitigation, booming strategies, appropriate contingency measures and demobilisation criteria.