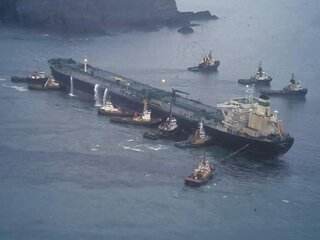 The oil tanker SEA EMPRESS, carrying 130,000 tonnes of Forties Blend North Sea crude oil, ran aground in the entrance to Milford Haven, South-West Wales on the evening of 15th February 1996. Although the tanker was refloated within a couple of hours, it sustained serious damage to its starboard and centre tanks, resulting in a massive release of oil.

Attempts to bring the vessel under control and to undertake a ship-to-ship transfer operation were thwarted by severe weather and the tanker grounded and refloated several more times over a period of five days.

In all, some 72,000 tonnes of crude oil and 370 tonnes of heavy fuel oil were released into the sea between the initial grounding and the final refloating operation.

The subsequent clean-up operations were wide-ranging and effective. At sea these included dispersant spraying, mechanical recovery and the use of the protective booms. This, coupled with a high rate of evaporation and natural dispersion, greatly reduced the quantity of oil reaching inshore waters. Response vessels and other resources were provided from France and the Netherlands to assist in the response.

Some 200km of coastline - much of it in a National Park - was contaminated and a major shoreline clean-up effort had to be mounted. This involved mechanical and manual recovery, trenching, beach washing, and the use of dispersants and sorbents.

The main recreational beaches were cleaned by the Easter holidays, some two months after the spill, although other areas required longer treatment throughout the summer.

A temporary ban was imposed on commercial and recreational fishing in the region and there was concern that tourism, important to the local economy, would be badly affected by the heavily oiled beaches. Several thousand oiled birds washed ashore, leading to a major cleaning and rehabilitation operation.

The UK government appointed an independent committee, the Sea Empress Environmental Evaluation Committee (SEEEC), to assess the damage caused by the spill. It found that although some wildlife populations were damaged (some severely) and a few would take years to recover, the great majority proved resilient and after two years had regained their former abundance. It appears that although a very large amount of oil was spilled in a particularly sensitive area, the impact was far less severe than many people had expected. This was due to a combination of factors - in particular, the time of year, the type of oil, weather conditions at the time of the spill, the clean-up response and the natural resilience and recovery potential of many marine species.

ITOPF was involved extensively in the response and subsequent activity.

We arrived on-site the morning after the incident and provided advice to the port authority, local councils, UK Marine Pollution Control Unit and other response organisations. We also assisted in determining the extent of the contamination geographically and to local fisheries and other businesses. In total, 7 members of the ITOPF team attended on-site over subsequent months.

ITOPF also assisted the P&I Club and IOPC Funds to assess claims, contributed to the SEEEC and provided evidence to Lord Donaldson’s subsequent review of the command and control of salvage and intervention activities.