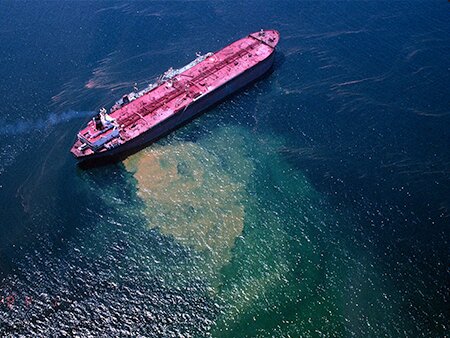 On the 30th March 1994 the tanker BAYNUNAH collided with the tanker SEKI (153,506 GRT) off of the coast of Fujairah (United Arab Emirates) causing SEKI's No. 1 port cargo wing tank to rupture. Although BAYNUNAH did not spill any oil as it was in ballast, SEKI was carrying 293,000 tonnes of Iranian light crude oil, of which 16,000 tonnes spilt subsequently into the Gulf of Oman.

The wind and currents caused the oil to wash ashore over 30km of coastline north of the UAE port of Khor Fakkan. Offshore winds then caused much of this oil to refloat and be carried back to sea, resulting in some natural dispersal. However some of the crude arrived ashore again, further north in the UAE and in Oman. A number of environmentally and economically sensitive areas were affected.

SEKI was quickly placed at anchor and a dive survey confirmed that no further oil was being released.

The initial response to the oil spill was organised by the Fujairah Port Authority, with resources from a local contractor engaged in offshore recovery operations. Additional clean-up resources were provided by a national oil company and the Oman government. Vacuum trucks and skimmers were used from shore to collect oil pooled against the coast.

Shoreline clean-up was organised also by the port authority in consultation with the municipalities in Fujairah and Sharjah. Penetration of the oil into coarse sand beaches and deposition of sand on top of oil led initially to large-scale removal of beach material. Concerns at the scale of sand removal led to alternative manual flushing of the beach, assisted by natural removal of oil through wave and tidal action

The oil affected a number of artisanal fisheries, particularly fishing gear, with the UAE authorities imposing a suspension of fishing activities. A power station and desalination plant immediately south of Khor Fakkan were shut down temporarily at night as a precautionary measure. Several tourist amenity beaches were affected, although the impact was reduced due to the main tourist season occurring later in the year.

By April 1995 onshore clean-up ceased on the advice of ITOPF, who suggested that leaving the remaining oil to be cleaned naturally by wave action and weathering would be less damaging to the natural environment than the more invasive methods of mechanical and manual cleaning.

Claims for compensation, including the costs of clean-up, fisheries losses and environmental damage, were submitted to the vessel's P&I Club under the Civil Liability Convention.

ITOPF quickly arrived on site; acting as technical advisers to the UAE authorities on behalf of the ship-owner, the P&I Club and the IOPC Fund. Aerial surveillance helped the ITOPF experts to make informed recommendations on the methods of response most appropriate to the situation. ITOPF staff assisted also in the assessment of claims, particularly to establish a reasonable level of fisheries losses.