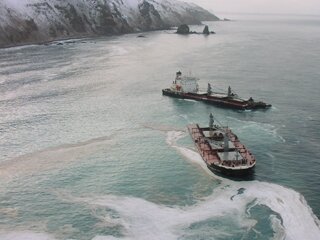 On 7th December 2004, the Malysian bulk carrier SELENDANG AYU (39,775 GT; built 1998) suffered engine failure whilst en-route from Seattle, USA to Xiamen, the People's Republic of China. Despite the best efforts of the crew, the vessel ran aground off Skan Bay, Unalaska Island, Alaska. Shortly after the grounding, the vessel broke in two as a result of the severe weather. Six crew members died whilst being lifted from the ship by helicopter.

Unalaska Island is part of a protected natural reserve, and Skan Bay is home to First Nations’ archaeological sites and subsistence fishing and hunting grounds, as well as seabirds, bald eagles, sea otters, Steller sea lions and whales. Commercial crab and herring fisheries are also important to the local economy. As a result of the spill, approximately 2,000 marine birds and 10 sea otters were reportedly oiled and fishing activities in the immediate vicinity of the wreck were suspended.

The incident location was remote from major infrastructure, and shorelines were accessible only by air or sea; the nearest settlement, Dutch Harbor, was 50 km away but had no airstrip or road network. A response was mounted from mainland Alaska, coordinated by the US Coast Guard base at Kodiak, 1,000 km away. Local islanders provided much of the manpower (250 people in total), with equipment and supervision from the shipowner-appointed OSRO (oil spill response organisation). The response involved 23 vessels to transport personnel and equipment, and also to provide accommodation for workers.

The poor weather conditions prevented any response at sea and initial shoreline operations were restricted to protective booming of salmon rivers, SCAT (shoreline clean-up assessment technique) surveys, and bulk clean-up of mobile oil. The following spring, further SCAT surveys were conducted, which determined that 113 km of shoreline required further clean-up. A net environmental benefit analysis (NEBA) approach was adopted, with active intervention designed to augment natural recovery. Manual and in situ techniques were used where possible due to the logistical challenges of bringing equipment in and removing waste, with surfwashing and tilling used to clean oiled beach material. Clean-up was terminated in September 2005, some 10 months after the incident.

Natural Resource Damage Assessment (NRDA) studies were conducted by US federal and Alaska state agencies to determine the impact of the incident on local habitats, with a number of restoration projects proposed.

The shipowner, through the P&I Club, provided compensation up to the limit of liability established under the 1990 US Oil Pollution Act, with the remainder paid from the US National Pollution Funds Centre.

ITOPF was requested to attend on site immediately following the incident by the P&I Club, and made several subsequent visits to monitor the seasonal shoreline clean-up operations. ITOPF was also closely involved in the preparation of winter and summer response plans, and provided advice on the technical merits and suitability of the proposed NRDA restoration projects during meetings with Alaska State Trustees, the P&I Club and scientific advisers.