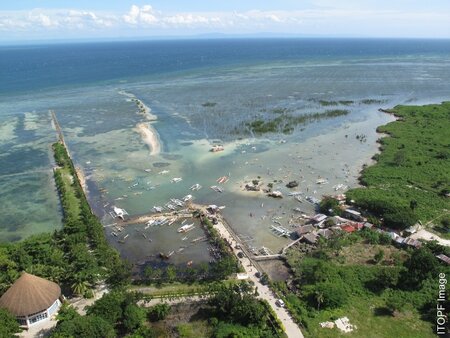 On 16th August 2013, RORO passenger vessel ST THOMAS DE AQUINAS (STA) (11,405 GT, 1973 built) collided with containership SULPICIO EXPRESS 7 (SE7) (9,691 GT, 1980 built) on approach to port in Cebu, Philippines. The STA sank within 15 minutes, settling in 40m of water. The incident resulted in the loss of over 100 lives of the 813 passengers and crew on board STA at the time. Although SE7 sustained major damage to the hull, it was able to steam back to port, and suffered no casualties or bunker release.

At the time of the incident, STA carried 120 tonnes of Intermediate Fuel Oil (IFO180) on board, an unknown quantity of which was released instantaneously following the collision. As well as fuel oil, the vessel had 20 tonnes each of diesel and lube oils and approximately 100 TEU containers. These are understood to have contained food produce and construction materials, with no dangerous goods listed on any manifests.

Following the sinking, response efforts undertaken by the Philippine Coastguard (PCG) understandably focussed on search and rescue operations. Oil was observed reaching the shoreline in the morning of 17th August.

The coastline of Cordova is dominated by dense mangrove stands to the west, becoming increasingly sparse to the east and giving way to uneven, limestone rocks with marsh and mangrove assorted vegetation dominating over true mangrove trees. As with many rural parts of the Philippines, subsistence and small-scale fishing is an important economic activity, and several small fishing ports can be found in the area. The degree of contamination varied, and was predominantly in the form of stranded bulk oil in more sheltered locations and fishing ports, staining of man-made structures and contamination of mangroves.

In the month following the incident, small quantities of fuel oil continued to be released from the wreck, at a relatively constant rate. Debunkering operations throughout September were able to remove the majority of fuel remaining on board.

In the initial phases of shoreline response, the disaster management and reduction committee, chaired by the Governor of Cebu mobilised personnel from several military organisations. Following this initial phase, and in line with oil spill arrangements in the Philippines, the shipowner was required to assume responsibility for shoreline clean-up operations.

ITOPF arrived on site two days following the spill, and became heavily integrated in all aspects of the response. When the time came for the shipowner to take over from the authority-led response, ITOPF was in a position to provide highly specific and detailed recommendations. It was advised that a clean-up workforce be created in collaboration with the company that had been appointed to manage waste disposal for the incident.

Subsequent to the assembly of a spill response team, ITOPF assisted in the sourcing of equipment and provided two days of training for the personnel. Once clean-up operations were underway, ITOPF remained on site for the duration to supervise the work. Other activities during this time included the provision of information to local government on the effects of and response to oil spills.

Following the termination of clean-up operations, and in the absence of any legal requirement, the Club P&I commissioned a study to investigate the impacts on the mangroves in Cordova. ITOPF has remained involved with the case and has provided advice on various aspects of claims.