STOLT VALOR, off the Kingdom of Saudi Arabia, 2012 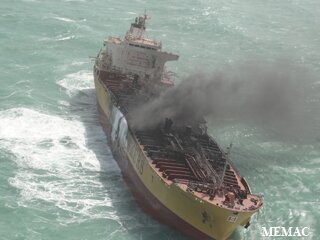 On 15th March 2012, STOLT VALOR (15,732 GT; built 2004) carrying 13,000 tonnes of methyl tertiary-butyl ether (MTBE) and 1,300 tonnes of isobutylaldehyde (IBAL) as well as 430 tonnes of Intermediate Fuel Oil (IFO 380) as bunkers, suffered an explosion in international waters off Ras Tanura, Kingdom of Saudi Arabia. The crew were evacuated by the US Navy and salvors appointed by the shipowner to respond to the incident. In the following days, attempts to tow the vessel further away from the coast were made, until the towline broke in bad weather and STOLT VALOR drifted off the Kingdom of Bahrain towards the State of Qatar with the fire still raging. A towline was successfully re-established on 19th March a few nautical miles from the coast of the State of Qatar and the casualty was eventually towed offshore.

The fire was controlled on 20th March and an assessment of the vessel was undertaken by salvors. At that time, mid ship tanks had suffered extensive damage. Boundary cooling of the hotspots and the closing of ventilation and outlets of fuel oil tanks was carried out. Simultaneously, investigations for potential places of refuge, in order to carry out safe removal and lightering of the fuel oil and remaining cargo, were being made with requests sent to the State of Qatar, the Kingdom of Bahrain, the Kingdom of Saudi Arabia and the Islamic Republic of Iran. None of these countries granted refuge to the casualty and bunker oil removal started at sea on 24th March once the risk of further fire and explosion risk were reduced.

A salvage tug was deployed with oil spill response equipment onboard to address any oil spillage during the bunker oil removal operation and daily oil trajectories were simulated as part of the contingency arrangements. Other response capacities were deployed by the neighbouring Gulf States at various stages of the incident. The oil removal operation was completed on 2nd April and the cargo removal was completed on 29th April. No leakage of oil or cargo was reported throughout the operation and the casualty was eventually towed to a shipyard in the Kingdom of Bahrain to be recycled.

Owners and the vessel's P&I Club were in contact with ITOPF from the early stages of the incident and after monitoring remotely it was agreed that ITOPF would travel to the State of Qatar on 19th March in relation to the risk of grounding. ITOPF relocated to the Kingdom of Bahrain on 23rd March to assist the salvors and oil spill response contractor. ITOPF liaised extensively with MEMAC (Marine Emergency Mutual Aid Centre), which played a central coordination role in the incident, as well as with Qatar Petroleum while in the State of Qatar, and the Bahraini authorities while in the Kingdom of Bahrain, to discuss the development of the operations, explain the contingency arrangements and to promote a reasonable response from the neighbouring States. A contingency plan, as well as risk assessments in relation to the cargo remaining onboard were produced with ITOPF's input at various stages of the response, and were presented to the Bahraini authorities and MEMAC. ITOPF also provided comments on a study proposal submitted by the Kingdom of Saudi Arabia and MEMAC to assess the damage caused to the environment as a result of the incident.