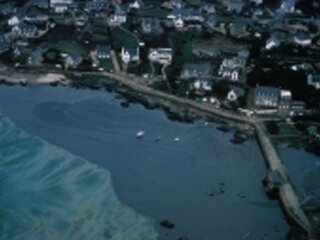 On 7th March 1980 TANIO, carrying 26,000 tonnes of No. 6 fuel oil, broke in two during violent weather conditions off the coast of Brittany, France. As a result approximately 13,500 tonnes of cargo oil was spilled. The stern section, with about 7,500 tonnes of cargo oil aboard, remained afloat and was towed to Le Havre; the bow section, carrying 5,000 tonnes of cargo oil, sank to a depth of 90 metres. Strong north-west winds at the time of the incident moved the oil towards the Breton coast (which had already received major oil impacts from the TORREY CANYON spill in 1967 and the AMOCO CADIZ in 1978). Due to the high viscosity of the oil and severe weather conditions, neither chemical dispersion nor containment and recovery techniques at sea were possible. The spilled oil began to be washed ashore on 9 March, and eventually contaminated about 200km of coastline to varying degrees. Many of the worst affected areas could not be boomed effectively because of the nature of the coastline, the extremely large tidal range (9m) and the severity of the weather at the time of the accident.

As tourism is of major importance in Brittany, the main emphasis of the cleanup operation was to return amenity areas to a usable condition as quickly as possible. In severely contaminated areas, bulk oil was removed by the use of tractor-drawn vacuum trucks, but this technique could not be used on cold, cloudy days when the oil became too viscous. Owing to concern that a forthcoming high tide would extend the shoreline contamination, it was decided that a more rapid removal of the bulk oil was required. Heavy earth-moving equipment (bulldozers and front-end loaders) was therefore used despite the well-known detrimental effects of driving heavy equipment over severely oiled beaches. While much oil (and a considerable amount of beach material) was removed within a short time, the underlying sediments at a number of sites were heavily contaminated and required extensive restoration work at a later stage. Where access was difficult or where the deposits of oil were thin or well spread out, men with shovels were employed to pick up the oil and to put it into sacks or tractor-drawn trailers. Oil collected during the cleanup operation was taken to a tanker deballasting station for treatment. The removal of bulk oil was followed by the cleaning of the rocks in the tourist areas, using hot water washing machines and high pressure cold water jets. Released oil was collected using granular mineral sorbents and dispersants were used in cases of severely contaminated rocks. By the time the cleanup operation was completed at the beginning of July most of the beaches and accessible rocks had been restored to something approaching their pre-spill state.

The TANIO spill presented considerable cleanup problems to which there was no easy solution, but the low toxicity of the oil meant that the environmental effects were limited. Approximately 1,700 dead birds, primarily guillemots and other auks, were recovered during the incident, and there were some localised effects - such as contaminated oyster beds and disrupted seaweed harvests - caused by the smothering of intertidal life and by the extensive cleanup operations at the worst affected areas.