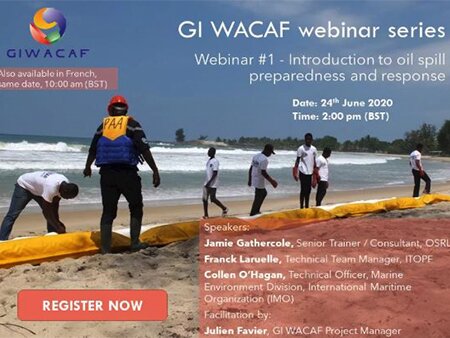 Franck Laruelle of ITOPF was one of the presenters on the first of GI WACAF’s new series of free webinars held on Wednesday 24th June. This series aims to cover the key aspects of oil spill preparedness and response from a technical, legal and institutional perspective, including the regulatory international framework, shoreline and at-sea response techniques, as well as the importance of contingency planning.

GI WACAF is a joint IMO/IPIECA project, which was launched in a shared desire to improve the level of preparedness and response to oil spills in the west, central and southern Africa region.

The first webinar provided an introduction to oil spill preparedness and response and covered topics such as sources of oil pollution, and the fate, behaviour and impacts of oil. IMO, Cedre and OSRL were also on the speaking line-up. The webinar was conducted in French during the morning, attracting an audience of 67 delegates mainly from governments and administrations of the French-speaking countries of the GI WACAF region.  In the afternoon, an English session was held, with over 230 attendees from more than 30 countries, including representatives from governments, international organisations, the oil and gas sector, spill response organisations, ports, and NGOs. The next seminar will be held in July. Further details are available on GI WACAF’s website.