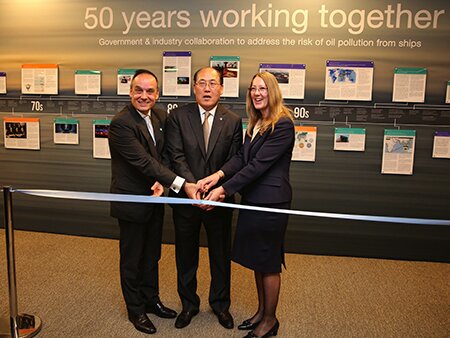 An exhibition charting 50 years of cooperation between government and industry for the safe transport of oil by sea was opened on Monday 16th January at the headquarters of the IMO.

The exhibition is a collaboration between ITOPF, the IMO and IOPC Funds, supported by other industry partners.

In 1967, the grounding of TORREY CANYON focused the world's attention on the risks and environmental impact of major marine oil spills. The intervening fifty years have seen a dramatic and sustained reduction in tanker spills, thanks to the cooperative efforts of governments and industry. The exhibition tells the story of this collaborative work which today has resulted in a comprehensive regulatory framework, a demonstrably improved shipping industry, good systems of preparedness and response and adequate compensation for those affected by spills. Demand for oil remains strong and shipping remains the most effective means of meeting that demand.

The exhibition was opened by Mr José Maura, Director of the IOPC Funds, Mr Kitack Lim, IMO Secretary-General, and Dr Karen Purnell, Managing Director of ITOPF (pictured left to right) at the meeting of the IMO Sub-Committee on Pollution Prevention and Response.

The exhibition will run at IMO Headquarters in London, until 7th July 2017.