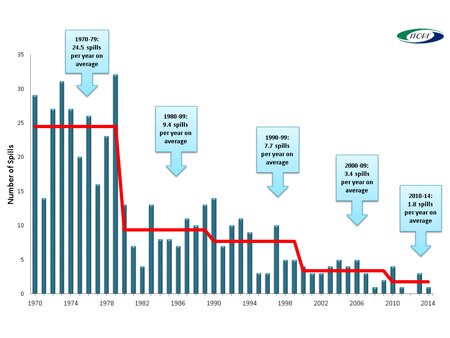 At a time when focus on protecting the marine environment is high, this trend should provide encouragement to tanker owners. It is also a testament to the ongoing work by industry and governments to maintain high standards of operations in sea-borne transportation.

During the year, ITOPF recorded 1 large spill of bitumen (~3,000 MT) from a tanker in the South China Sea, and 4 medium spills of various oil types, totalling 5 spills of 7 tonnes and over. Interestingly, a number of tanker incidents reported in the media in 2014 involved fire and explosion, where potentially significant quantities of cargoes and bunker fuel burned. The cargoes involved included condensate, diesels and fuel oils.