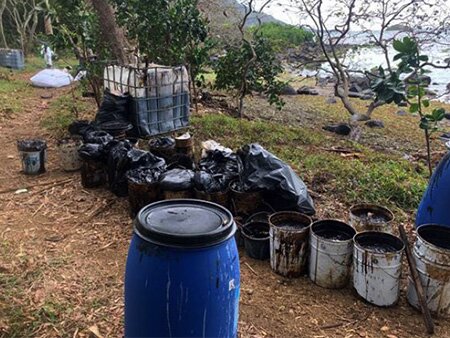 As previously reported, the vessel broke in two on 15th August. The bow section was towed from the reef and all free-floating items and hydraulic oil removed. On the authority of the Mauritian government, the bow was scuttled in deep water eight nautical miles off the south-east coast and is now resting on the seabed.

The stern remains aground on the reef. Discussions on the best course of action for its removal are on-going.  All pumpable oil has been removed from the vessel and efforts are focused on removing any floating debris onboard.

It is understood that 3,325.68 m³ of various oils have been transferred from the vessel in total.

Further equipment and personnel have now arrived on the island from the Indian Coast Guard and the clean-up contractors appointed by the vessel’s insurers, Le Floch Dépollution and PolyEco.

Specialists from the UK’s Centre for Environment Fisheries and Aquaculture Science (Cefas), and Japan’s International Cooperation Agency and Centre for Environmental Biology and Ecosystem Studies are now on-site assisting the Mauritian authorities in setting up an environmental monitoring programme. Experts from the UN, CEPPOL (the French Navy Pollution Response branch) and Cedre (a French organisation specialising in accidental water pollution) are also in attendance, and other governments are providing support remotely.

It is understood that sampling and monitoring of air and water quality, fish and sediment sampling are all being carried out on behalf of the Ministry of Environment and Ministry of Fisheries. Coral and mangrove sites are also being surveyed.

Strict safety precautions are in place for overseas visitors to avoid the spread of COVID-19 on the island.

With the removal of all pumpable oil, the wreck is no longer considered to pose a significant risk of further oil pollution.

Some oil has remobilised from the shoreline and is visible nearshore on the lagoon, largely in the form of rainbow or silver sheen.

Plans are on-going for the phased removal of booms where they are no longer effective or pose a risk of damage to the underlying coral reef.

Some on-water operations continue for the collection of oil and oily debris, but the main focus of response efforts is the shoreline.

Approximately 32km of shoreline have been oiled to varying degrees.

Clean-up has commenced at sites identified as priorities by the Ministry of Environment.

Local fishermen have been trained in beach cleaning techniques by the contractors and are being employed in the shoreline operation.

Focus has been on removing large accumulations of oil to prevent it remobilising.

Techniques currently being used include the manual removal of bulk oil using scoops and shovels, low-pressure flushing using absorbents to collect the released oil, and, in some areas, high pressure washing. Oiled debris and tar balls have also been manually collected at priority sites, including public beaches.  Particular care is being taken with sensitive mangrove areas to avoid damage to prop roots.

A priority for the clean-up contractors is the removal of oily waste collected during the early stages of the incident by the police, NGOs and volunteers. This is situated along the length of the affected shoreline, sometimes in difficult-to-access areas for vehicles. It consists of liquid oil in barrels, drums and IBCs, as well as solid waste in the form of oiled vegetation, litter and PPE.

To date, nearly 1,200 m3 of liquid waste and 1,900 m3 of solid waste have been transported to waste disposal sites on the island.