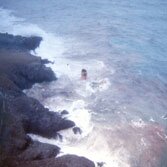 Following engine failure, BRAER ran aground in severe weather conditions on Garth's Ness, Shetland on 5th January 1993. Over a period of 12 days the entire cargo of 84,700 tonnes of Norwegian Gullfaks crude oil, plus up to 1,500 tonnes of heavy bunker oil, were lost as almost constant storm force winds and heavy seas broke the ship apart. Weather conditions prevented the use of mechanical recovery equipment at sea, although about 130 tonnes of chemical dispersant was applied from aircraft during periods when the wind abated slightly and some oil remained on the surface. Oiling of shorelines was minimal relative to the size of the spill and cleanup involved the collection of oily debris and seaweed by a small workforce.

The BRAER spill was very unusual in that a surface slick was not produced. A combination of the light nature of the oil and the exceptionally strong wind and wave energy naturally dispersed the oil throughout the water column. The oil droplets were adsorbed onto sediment particles which eventually sank to the sea bed. Sub-surface currents led to this oil being spread over a very wide area, although a significant portion eventually ended up in two deep, fine sediment 'sinks'.

A wide range of fish and shellfish over a fairly large area became contaminated with oil, resulting in the imposition of a Fisheries Exclusion Zone. Farmed salmon held in sea cages in the surface waters within this zone bore the brunt of the contamination since they could not escape the cloud of dispersed oil. Although this contamination was lost quickly once clean water conditions returned, millions of salmon that could not be marketed had to be destroyed. The Exclusion Zone was progressively lifted as fish and shellfish species were found by chemical analysis and taste testing to be free of contamination, although it was still in place over 6 years after the spill for mussels and Norway lobsters at some sites within the closure area.

The BRAER spill was unusual in that a significant amount of oil was blown on to land adjacent to the wreck site. The effects of this airborne oil were localised and had no more than a temporary impact on vegetation and livestock. Seabird casualties were also relatively low. Considering the size of the spill, the environmental impacts were surprisingly limited.