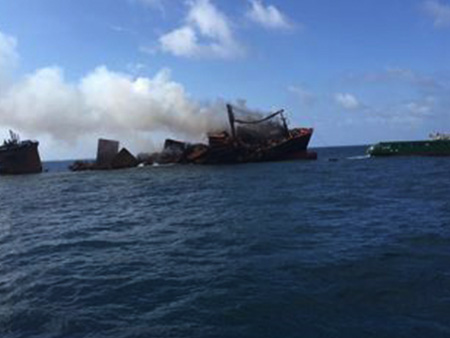 ITOPF has been mobilised to Sri Lanka to provide technical advice on the loss of chemicals, plastics and other cargo from the containership X-PRESS PEARL.

X-PRESS PEARL caught fire on Thursday 20th May whilst at Colombo anchorage, Sri Lanka, approximately 10km offshore. The vessel had travelled from the port of Hazira, India and was carrying 1,486 containers, including dangerous goods (nitric acid, methanol, sodium hydroxide and other chemicals) and nurdles (small plastic pellets). It is understood that approximately 320 m2 of low sulphur heavy fuel oil was also on board as bunkers.

Despite the best efforts of salvors supported by the Sri Lankan Navy and Indian Coastguard, attempts to control the fire were unsuccessful.  All crew members were evacuated from the vessel.

As the fire took hold and spread, the container stacks collapsed and multiple containers, as well as burning liquids and debris, were reported falling overboard.  Within hours, burnt debris - ranging in size from less than 5mm to over 2m - was reported stranding along the coastline under the influence of strong and consistent westerly monsoon winds. Four containers have reportedly been washed ashore, and many more are expected to have sunk. Vast quantities of nurdles have also been observed arriving on the shoreline.

As at 2nd June, an estimated 150 km of shoreline is reported to have been impacted to varying degrees by assorted debris from the vessel.

The Sri Lankan Marine Environmental Protection Authority (MEPA), together with the Sri Lankan army and navy, are organising clean-up efforts on shore, focusing on the areas with heaviest contamination. The recovery operation comprises a mixture of mechanical and manual collection of the burnt debris and plastics.

Due to uncertainties surrounding the Covid pandemic in Sri Lanka, ITOPF initially provided advice remotely to the vessel’s insurer and MEPA. In particular, we advised on the risks posed by the HNS on board to human health and the environment; this included modelling plumes of vapours from various compounds.  We have also provided modelling simulations in case of an oil spill and to predict the likely location of stranded materials.

As events unfolded, we have provided advice to MEPA on clean-up measures for stranded containers, debris and nurdles, including suitable PPE. We have also produced a survey and reporting system to record the extent of contamination, which is being used by MEPA field officers.

On 31st May, two members of the team mobilised to Sri Lanka and, with official approval from MEPA, should be permitted access to site and operational meetings, following a short period of quarantine.