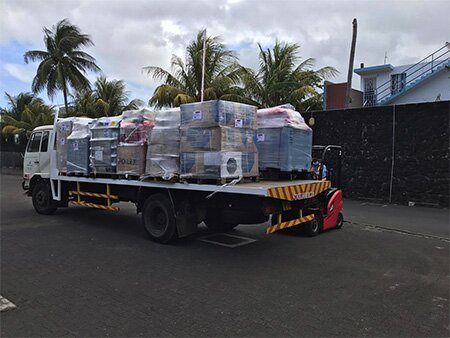 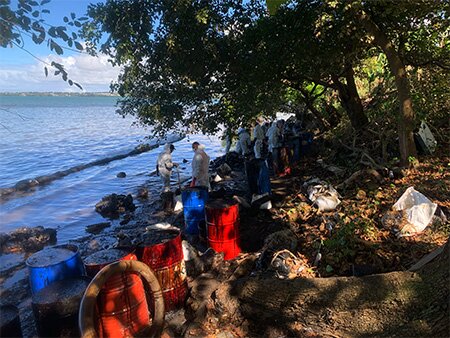 ITOPF was mobilised at the request of Japan P&I Club, the insurers of the vessel, and is working with the Mauritian government, local and international responders, surveyors and all other parties involved in the response operation.

WAKASHIO, which had been aground on the fringing reef at Pointe d’Esny since 25th July, broke in two in rough seas on Saturday 15th August. At this point, some 3320m3 of oil had been successfully removed from the vessel by the salvors, Smit.

It is understood that very little oil now remains in the wreck.

In total, approximately 1000 m3 of oil have spilled from the vessel, most of this during the initial release on 6th August.

The oil drifted into the lagoon surrounding Pointe d’Esny and has since come ashore around the Baie de Grand Port, contaminating approximately 32km of shoreline to varying degrees.

The coral islet of Ile aux Aigrettes has a science research post and supports a remaining pocket of Mauritian dry coastal forest which contains many rare and endangered plant and animal species.

To the south of the bay is the Blue Bay Marine Park, an internationally important nature reserve with rich coral and fish biodiversity.

In response to the call for assistance from the Prime Minister of Mauritius, there have been many offers of help from governments, international bodies, agencies and organisations worldwide.

The French Navy have sent in equipment, including a large multipurpose navy vessel; three aircraft containing spill kit have arrived from EPE, the Greek sister company of the local responder, PolyEco; and equipment and personnel have also been brought in by the French responder, Le Floch Dépollution.

Response craft from the coastguard and local contractor have been active in the lagoon for the deployment of boom, skimming/pumping operations and waste oil transportation.

The booms have served the dual purpose of containing the oil for collection by skimmers, and also deflecting it away from sensitive resources, including the Blue Bay Marine Park.

The at-sea operation has been overseen by the Mauritius Coastguard and Police Force and conducted by the local contractor. It is understood that local fishermen have also assisted in containment and recovery efforts.

In total, almost 4000m of boom has been deployed, plus other improvised boom placed at various locations around the lagoon by volunteers and NGOs.

Since the risk of further pollution from the vessel has declined, the main focus of clean-up activities has moved to the shoreline.

It is understood that initial shoreline clean-up efforts were undertaken by the police, who have been recovering pooled oil from the heavier contaminated sections of shoreline (primarily within areas of mangrove), and collecting oily debris from beaches. Volunteer groups from various NGOs have also been recovering oily debris using household tools and containers from some sites.

In order to assist the local effort, the vessel’s insurers have appointed Le Floch Dépollution to take charge of the clean-up operation. Le Floch are highly regarded responders from France, with extensive experience of organising and conducting oil spill clean-ups, particularly on shorelines.

From 14th August, Le Floch and ITOPF, together with the government authorities and other stakeholders, have been conducting extensive surveys of the coast of the Baie de Grand Port to gain an understanding of the extent of contamination, assess the types of techniques that would be suitable for the sites surveyed, and determine any logistical or technical challenges likely to be encountered.

Based on the surveys, ITOPF and Le Floch prepared a comprehensive shoreline clean-up action plan for the affected areas which was approved by the Mauritian government at the National Crisis Committee meeting on Monday 17th August. Le Floch will begin site preparation on Tuesday 18th August with active clean-up commencing on Wednesday 19th August.

More details on the clean-up activity will be provided in our next update.

Please do not use our emergency phone-line for information requests.