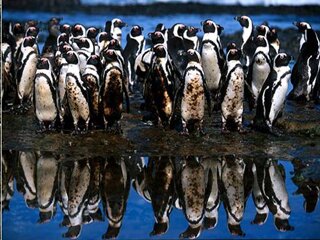 ITOPF provided Anton Wolfaardt, a PhD student, with funding from its Thor Heyerdahl Award to attend the 6th International Penguin Conference in Tasmania where he presented some of his key findings on the successful rehabilitation of Jackass Penguins during the TREASURE oil spill in South Africa, 2000. Anton is a former Chief Ranger at Dassen Island Penguin Sanctuary.

Although there is general consensus among investigators that large numbers of seabirds are killed as a result of oil spills, there is disagreement, mostly in the northern hemisphere, about the extent to which oil mortality is biologically significant to local, regional and global populations. The Treasure spill provided an opportunity to broaden our understanding of the impacts of oil spills on African Penguins, including the population-level benefits of de-oiling contaminated birds.