Oil pollution risk assessment and preparedness in the East Mediterranean (2005) 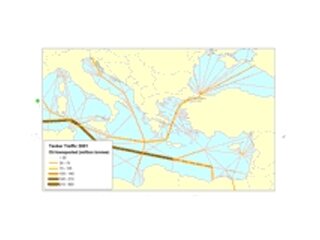 The East Mediterranean is an area of high oil traffic because it is an important transit centre between Middle Eastern/Russian oil and the western European countries/USA. Recent traffic developments show that the importance of this centre is expected to increase. ITOPF and REMPEC carried out a joint risk assessment study of the area. For the purpose of this paper the "East Mediterranean" includes the Adriatic Sea and the East Mediterranean Basin; this was necessary to carry out a comprehensive analysis of the issue, as the oil traffic in the Adriatic is strictly linked with the activities occurring in the East Mediterranean basin. The aim of this study is to test the hypothesis that the East Mediterranean is a high risk area for oil spills. For this analysis the ITOPF oil spill data set was used (1974 to 2003). Results show that the majority of spills involving a quantity of less than 7 tonnes are operational, whereas medium and major spills result from accidents. Crude oil spills appear to have the highest occurrence in each of the spill size categories, with the highest value for major spills; the accident occurrence appears to be closely related to the import flow. A risk analysis for the East Mediterranean has been overdue, as this area is characterised by a very heterogeneous level of preparedness and response, by several sensitive areas, and a lack of active bi/tri-lateral cooperation agreements. It is concluded that the Eastern Mediterranean is a high risk area for tanker spills, and the risk is likely to increase with the predicted increases in tanker traffic.