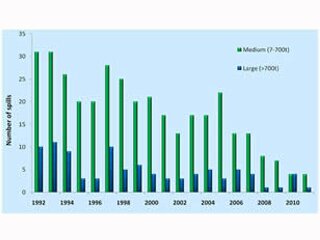 The number of oil spills from tankers has decreased significantly over the last 20 years. The average number of spills between 2002 and 2011 is approximately half of that in the period between 1992 and 2001. The trend in ITOPF attended incidents shows that the percentage of tanker incidents attended per year has decreased and the percentage of non-tanker incidents has increased. There are many factors that contribute to the overall decline in the volume and frequency of spills, but it is most likely to be a combination of implementation and enforcement of conventions and regulations, training, assessments and communication, and development of technology. This paper examines trends in tanker oil spills worldwide over a 20 year period from 1992 to 2011 and analyses potential influences on spill volumes and frequencies for incidents in the spill size groups 7-700 tonnes and >700 tonnes. ITOPF's attendance of incidents is also analysed to demonstrate trends in the complexity of oil spill response.